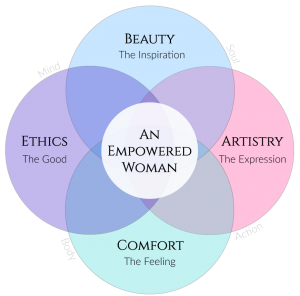 What are the four qualities stitched into every nightie?

I believe that there are four qualities present in every empowered woman: artistry, empowerment, comfort, ethics and refined beauty.

I believe that women can easily get stuck or trapped in one or a couple of these four qualities and, whether by choice or by limited options, the garments she wears are not serving her fullest potential of womanly expression. A woman expresses kindness and mercy through ethics, grace through beauty, self-confidence through comfort, and adventurous self-expression through art.

I believe when a woman is tuned in and embodies all of these aspects she is at her best. And it is well known that when women feel their worst, they dress their best to uplift themselves. I believe women should wear uplifting clothes that inspire their best selves every day (and night). And why do we need women to be their best selves, to be empowered in the world at all? You can read about that here.

“The longing at the heart of attraction is for union with the Beautiful.” -John O’Donohue

I believe that beauty is like water to a woman’s soul and that without it in her life she withers away. It is an essential nutrient for her to see and be in touch with beauty, whether it is the starry sky, a garden of flowers or a gourmet and romantic farm-to-table meal in a beautifully designed restaurant, or relaxing in a luxurious spa.

Having beautiful things in her life and feeling herself as beautiful, inside and out, are vital. Where insecurity is her kryptonite, beauty is her strength. What is insecurity after all but the fear of some stain or blemish in one’s appearance or character that will not be perceived as beautiful to others?

Beauty is what we all crave.

Culturally adopted ideas of beauty aside, I am talking about take-your-breath-away beauty, like a sunset over the ocean, a captivating painting, a piece of music that melts your heart, or a mesmerizing flower that is unparalleled in delicacy and exquisiteness. This is what I am trying to achieve: masterful beauty in the construction, the ethics, the details and the appearance. I am like the moon chasing the sun in the way that I chase beauty in my work. If I am lucky, a fragment of that will shine through.

A woman’s life is ruled by the mundane, arbitrary, comfortable but lackluster mechanical routine. Beauty is the spark in our hearts and without it we become numb robots following the codes of comfort and ethics, creating as duty rather than as an exploration and striving towards something greater than ourselves. 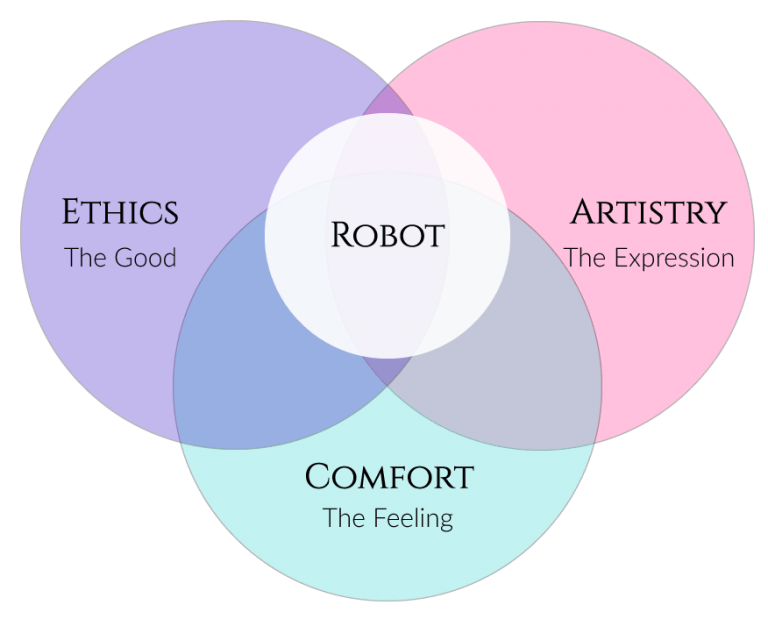 “Sexuality was a doorway into play, into imagination and creativity
and getting back some part of myself I might have lost when I was little.” -Amy Jo Goddard

The ancient book on love by Ovid, Ars Amatoria translates to the Art of Love. The way a woman is creating her own persona and life is like an artform for her, and her education and skill as a lover is an art. And I approach making garments like they are a canvas of art.

Artistry is an endangered species. Across the world traditional artistic skills are going extinct at an alarming rate. Machines have been made to reproduce the human arts and skills but they have not matched it, merely imitated it.

Culturally we are stuck in easy, cheap, fast and routine which are all killers of creative expression and masterpiece creation. We are not whole without artistry. Our lives pale in vibrancy and vitality when we lack it, like a vitamin deficiency. Artistry is a right-brain activity. Without it we are only utilizing half of our brain.

Where beauty is the altar, artistry is the devotee.

I approach my work as art to preserve artistic heritage knowledge and technique from going extinct.

I approach my work as art to step out of ‘manufacturing’ and into ‘mastering’ with one-of-a-kind pieces.

I approach my work as art to instigate creative inspiration and expression within those who wear and receive these pieces.

Another way to look at artistry is as creative play.

A woman’s sexuality dries up when she is not accessing the parts of her that are playful and creative, when foreplay and intimacy itself is no longer an artform for her. So many women are told they have low-libido issues in relationships, but those same women can recall fiery flames when they first fell in love.

I believe it is because a woman is filled with creative play and artistry in the beginning of a relationship and over time, loses it. And I believe that reconnecting with this side of herself is one of the keys to a fulfilling intimate connection in long-term relationships.

Women are bored & unsatisfied in bed.

I think this is how she rises up. She taps into her creative powers, plans dates and surprises, she lets her imagination fly and gets playful. Generally, women like to dress up, cook, dance, decorate her house, make art, tend a garden… but for some reason women have this paralysis from expressing this creative side in the bedroom. I think that comes from insecurity and false expectations. It’s something women can tap into and unlock for more fulfilling experiences in their relationships and with themselves.

When a woman learns to approach dressing up as creative play, she becomes the artist and the canvas.

And, if women choose to dress up, it’s hard to find something that feels right.

I think nighties, largely absent in modern culture, are perfect for this.

Comfort and goodness feel good but she lacks action and that lack of expression stagnates, bottlenecks, suffocates, and eventually turns into repression that can leak out in unhealthy ways in her life, whether it is an eating disorder, illness, depression, or low level anxiety. She is the ‘Good Girl’, the ‘Perfect Wife’. 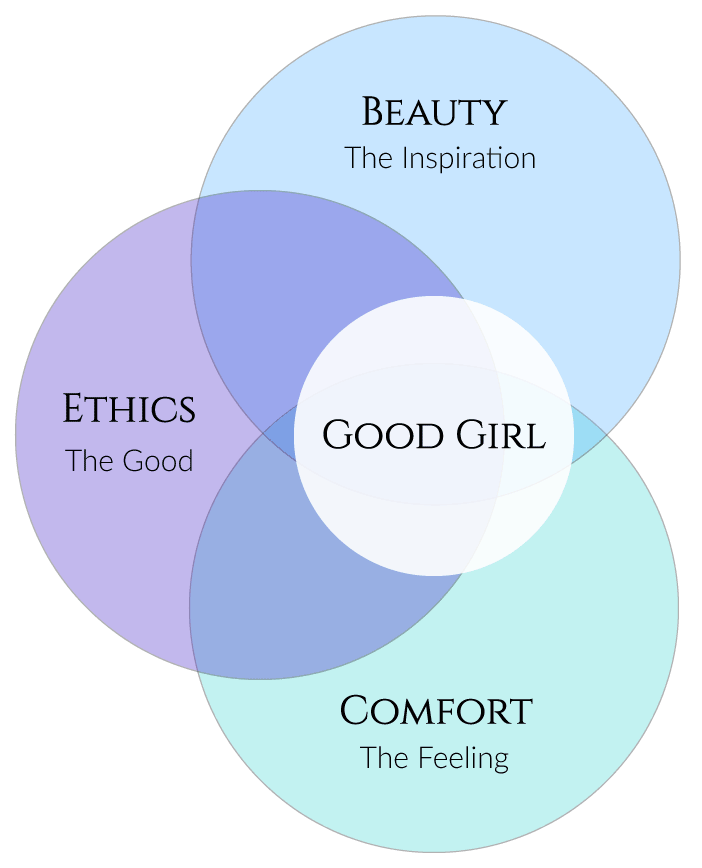 Comfort is a quality that has deep roots within our psyche.

Comfort is psychological, emotional as well as physical. A woman also wants to feel comfortable in her clothes in the way that it becomes a part of her unique and individual expression.

When I talk to women about what they want to wear, they want natural fabrics that feel comfortable and that flatter and enhance their natural body shape. It’s very difficult to find lingerie made of natural fibers. Many women do not feel comfortable wearing petroleum-based synthetic materials, which is what comprises 99% of all lingerie. It’s itchy. It scratches. It doesn’t breathe well and can even be bad for your health. There was a recent sleep study that confirms sleeping in synthetic fibers disturbs sleep. Whether conscious of it or not, synthetic fibers are disturbing the planet as much as they are disturbing our wellbeing, especially when they are in direct contact with the skin.

So many women reach for something easygoing and comfortable (e.g. spandex, sweat pants, jersey knitwear, bathrobes). But these all feel frumpy, unattractive and either like a kid or their grandmother.

Many women feel like they must choose between comfort and beauty. They either pick something that they think is elegant and attractive but doesn’t feel good or something that feels good but isn’t very elegant.

It doesn’t have to be a choice.

Emily Nagoski’s research reveals that comfort plays a huge role in a woman’s pleasure. When a woman is not comfortable, she simply cannot enjoy pleasure as much, it acts as an inhibitor. Just think of wearing a skirt that is riding up from static electricity when you walk. It is both a distraction and breeds self-consciousness and insecurity. I believe psychological, emotional and physical comfort are the launching pad for women’s uninhibited pleasure.

Comfort is a solid and stable base on which she can dance. Comfort protects her from insecurity rising up. It is the element that, when present, allows a woman to excel and reach for the stars. The nighties I make are designed by a woman, for a woman. They consider her full experience so that it feels good and supports her.

A woman becomes the performer. She is tuned into everyone else’s needs and what delights them but leaves herself out of the picture. Her discomforts are ultimately the chains that tether her and keep her from flying high, keep her from her own happiness. She desires love and acceptance but doesn’t recognize that to be loved for who she is, she needs to show up with all of herself, and more importantly to be truly happy, she needs to include her needs and wants. 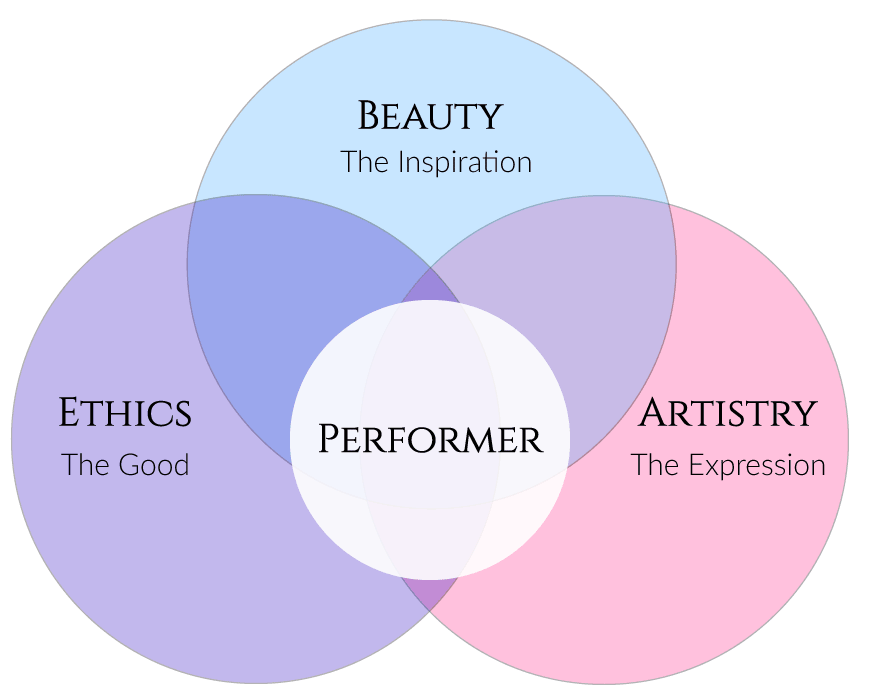 It is nearly impossible to find ethical and sustainable nightwear options that match a woman’s aesthetics. How can I be about women’s empowerment if my garments are made by women in sweatshops?

Women, whether they birth babies or ideas, have a deep-rooted instinct of preservation and care for health and wellness. I believe this care extends to all species and forms of nature, and that any form of violence anywhere are wounds to every woman’s heart. It is not something any of us would choose.

Unfortunately the fashion industry has become a very violent industry and it is nearly impossible to avoid partaking in that when we wear and buy clothing. I feel passionately that the industry needs to change, to become a force for good. And I know women across the world desire to wear clothing that is beautiful, comfortable and ethical. To provide an option for women is one of my principal goals.

This goal is easier said than done.

There are a lot of lies, cheating and closed doors, and most of it is far far away. I have been on a journey of research and investigation for a long time to find what meets the highest standards in honest ethics, quality and accessibility. I enjoy sourcing some extremely rare fabrics, like this one hand-woven silk by villagers in uzbekistan who are cultivating a wild moth variety and using its silk without killing the moths. The fabric is only 2 feet wide and is as soft and weightless as a feather. I hope to discover and support other examples of this kind of merging of exquisite quality with age-old handicraft techniques and ethical livelihood.

Beauty, self-expression and feelings can turn toxic -to others and even to the self. A medusa that turns others and her environment to lifeless stone. It corrodes her psyche and eats away at her over time in the forms of guilt, shame and regret. 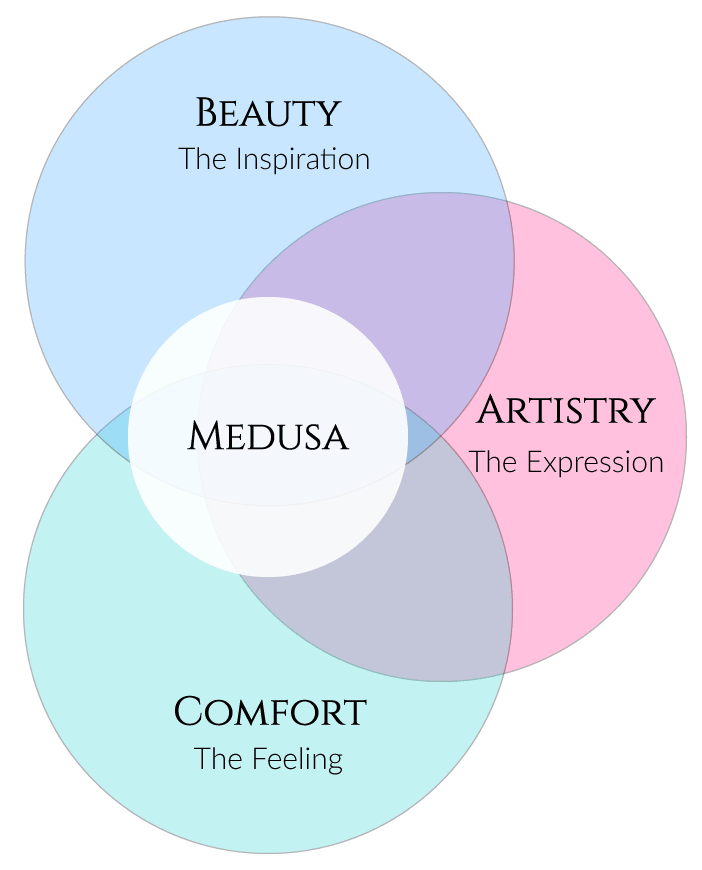 So, those are the four qualities I value most dearly as food for the feminine: beauty, artistic expression, comfort and ethics.

When all four qualities are present:

A woman has the capacity to flourish, to embody her strengths and powers to create the world and life she wants. She becomes a light unto others and a light unto herself.